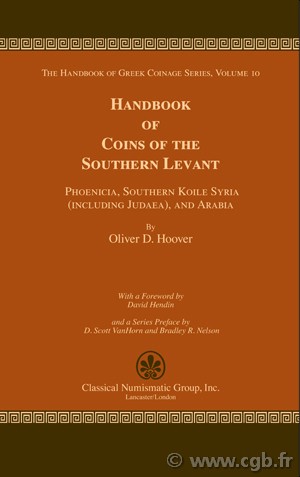 The Handbook of Coins of the Southern Levant: Phoenicia, Southern Koile Syria (Including Judaea), and Arabia, Fifth to First Centuries BC is arranged geographically from north to south with each region's city entries in alphabetical order. The coinage within each city is arranged chronologically and begin with the royal issues during the Persian Empire (as is the case with the cities of Phoenicia), through the issues of Alexander the Great (both lifetime issues and those later civic issues in his name). Where rulers or cities issued coins concurrently in all three metals, these issues will be arranged in the catalog with gold first, followed by silver, and then bronze; each metal is arranged by denomination, largest to smallest. Each entry will include a rarity rating based on the frequency with which they appear in publications, public and private collections, the market, and/or are estimated to exist in public or private hands. No valuations are listed in this volume either, since such values are generally out of date by the time of publication. The online valuation guide at www.greekcoinvalues.com will allow interested individuals the opportunity to gauge the market, and reduce the need for repeated updates of this series. Whether one purchases the entire set for their reference library, or the individual volume pertaining to one’s area of specialization, The Handbook of Greek Coinage Series should provide a useful staging-point from which collectors and interested scholars can pursue their research and interests..

The Handbook of Greek Coinage Volume 3 Part I - Handbook of Coins of Macedon and Its Neighbors. Part I: Macedon, Illyria, and Epeiros, Sixth to First Centuries BC HOOVER O. D.65.00 €

The Handbook of Greek Coinage Volume 3 Part II - Handbook of Coins of Macedon and Its Neighbors. Thrace, Skythia, and Taurike, Sixth to First Centuries BC HOOVER O. D.65.00 €