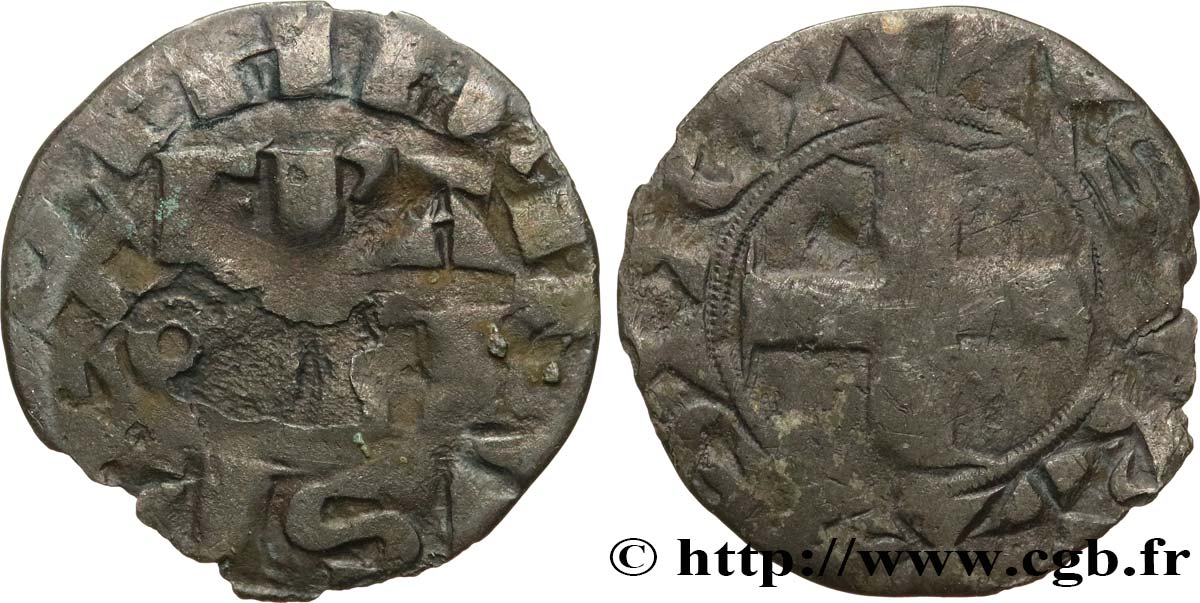 Son of Louis VII and Adèle of Champagne, Philip II was born in 1165. Sacred in 1179, only king in 1180, he released soon guardianship posed to her uncles: William of the White Hands, archbishop of Reims, the Liberal Henri, Count of Champagne, Theobald V, Count of Blois and Chartres, Seneschal of France, and Stephen, Count of Sancerre. To do this, he married from 1180 Isabelle de Hainaut, daughter of the powerful Earl of Flanders, Philip of Alsace, who would soon turn against him. The first five years of his reign were spent in an indecisive battle against several of his vassals. The Champenois are submitted first. In 1185, the Treaty of Boves, King Philip of Alsace gained on the expectation of Artois, part of Vermandois and Amiens. In 1186 he invaded Burgundy. In 1187, he attacked the Angevin domain and binds with Richard the Lion Heart, rebellious son of Henry II Plantagenet. The old king died in 1189, abandoned by all. Now this is Richard, his successor, who would stand against the king of France. In 1190, the two sovereigns still allies set off together for the crusade. Embedded one in Genoa, the other in Marseille, they joined in Sicily, where they lingered six months, and passed thence to St. Jean d'Acre Christians besieged for two years. Acre surrendered 13 July 1191. Soon, Philippe returned to France, leaving Richard East. Some time later, the latter, on the way back, fell into the hands of the Duke of Austria and Emperor Henry VI, captivity, which lasted until 1194, for the benefit of the King of France and brother of the prisoner, John Lackland. Upon release of the King of England, a fierce war ensued between Richard and Philip, during which the mercenary leaders on both sides indulged in looting and massacre. The fortunes of war went against the French, but the death of Richard, before Chalus, in 1199, Philippe delivered this formidable enemy. John Lackland, his brother and successor, did not have his warrior talents and went unpopular with his barons. In recent years, the King of France would strip him of much of his inheritance. In 1202, the King of England was declared a felon and sentenced to be deprived of its land. Normandy was conquered in 1204, Poitou in 1204 to 1205, Britain in 1206. In 1210, Philippe even planned to invade England. Soon, the domain of the king of England on the continent was reduced to Aquitaine. In 1213, a coalition was formed against the king of France, including Renaud, Count of Boulogne, Ferrand, Count of Flanders, John Lackland, and Emperor Otto IV of Brunswick. Philippe would be caught between an English landing in Poitou, and a German-Flemish invasion in eastern. However, July 2, 1214, Prince Louis undid the English at La Roche-au-Moines. July 27 at Bovines, Philip crushed the German-Flemish coalition. The Plantagenets were finally defeated and King John, England would soon be required to sign the Magna Carta (1215). The king of France could enjoy peace until the end of his reign. The increase of the royal domain under Philip II was unprecedented and all the great fiefs of northern France still independent (Burgundy, Champagne), had to bend to his will. In the south, the Albigensian Crusade opened the Languedoc to the King of France. Hence the nickname of Augustus, that he gave his historian Rigord, a monk of Saint-Denis. The progress of commerce, franchises granted to citizens, the rise of Commons, the organization of the royal court, the institution bailiffs All new time bear the mark of this first great reign of Capetian history. In 1193, Philip Augustus had married Ingeborg of Denmark. He divorced almost immediately, for reasons that have remained mysterious. Rome declared it null and void divorce and the new union of the king with Agnes of Meran. In 1198, Pope Innocent III threw the ban on the Kingdom and France, two years later, Philippe pretended to resume Ingeborg, to better keep imprisoned. It was not until 1213 that the reconciliation, at least formally, was finally held. His marriage to Isabella of Hainault, Philip had a son, Louis, born in 1187, who waged war on the orders of his father and reigned after him.