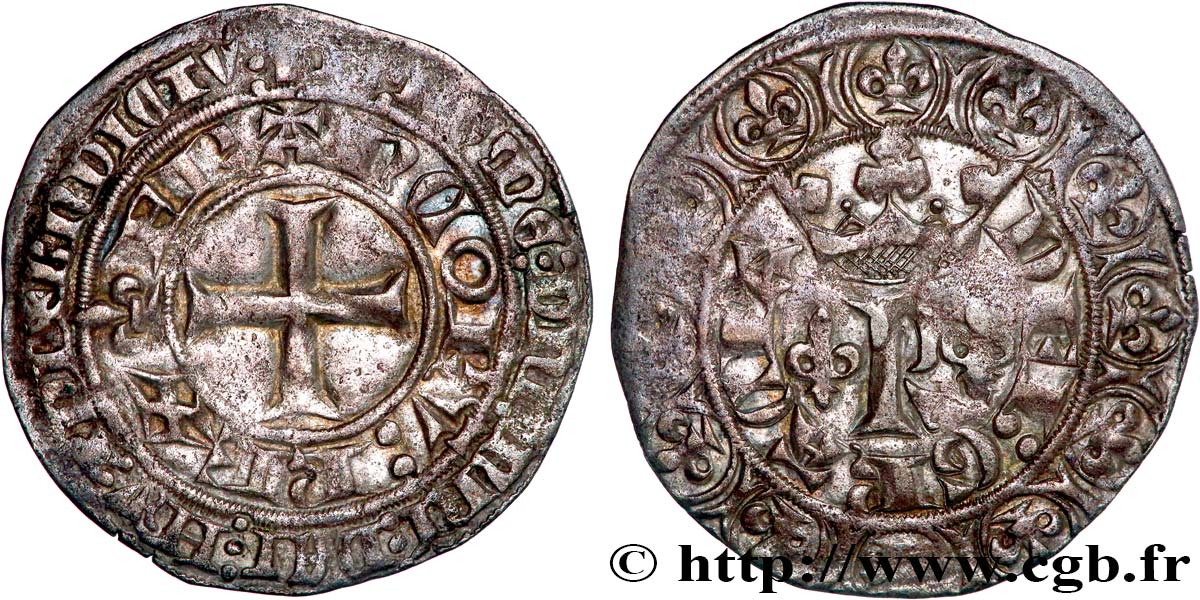 After the disasters of Philip VI and John II, the reign of Charles V is a brief moment of recovery of the kingdom of France. Born in Vincennes in 1337, son of John II and Bonne of Luxembourg, Duke of Normandy and regent during the captivity of his father, Charles V ascended the throne in 1364 with already a long experience in government. He had to wage war on several fronts. In Britain, the Treaty of Guerande (1365) recognized the victory of the party de Montfort. In Burgundy, the extinction of the old Capetian dynasty, the duchy passed to the brother of Charles, Philip the Bold. Finally, Cocherel in March 1364, Du Guesclin defeated the troops of Charles of Navarre. The same month, Charles V was crowned in Reims. In March 1365, the Navarre made his peace with the king. He also had to fight against the big companies that ravaged the kingdom. We withdrew a number by the expedition of Castile (1366-1367), where the fight continued Anglo-French. Du Guesclin, captured in April 1367, fell into the hands of the Black Prince, who freed against ransom the following year. However, the cities of Aquitaine, crushed taxes, rebelled against the Black Prince (1368). November 30, 1369, the King of France decided confiscation of the duchy. Immediately, Edward III went on the title of king of France, abandoned in 1360. The French reconquest was powerfully aided by the tax system that Charles had established during the previous decade. The navy was reconstituted and raids against the English ports. The great rides English captains, French oppose the establishment of fortifications and garrisons. Constable in 1370, Du Guesclin is placed at the head of an army of occupation which replaces the feudal ost. Artillery made its appearance in the seats. Treasurers wars ensure regular payment of troops. In 1369, Louis of Anjou said the Rouergue, Quercy and Périgord and part of Agen. In 1370, the remainder of these provinces fell to the French. The ride of Robert Knowles in northern France remained without result, the royal troops refusing to fight. In 1372, Poitiers and Saintes were taken, Aunis and Angoumois were annexed to the royal domain, Poitou given to Jean de Berry. In 1373, Edward III instructed his son John of Lancaster a great ride from Calais to Bordeaux. A truce was concluded in 1375. The Black Prince died in 1376, Edward III in 1377. His successor Richard II was only twelve years. He was left on the continent Bordeaux, Bayonne, and Calais. France therefore emerged victorious from the confrontation in January 1378, Charles V received with great pomp at Paris Charles IV of Luxembourg and his son Wenceslas. The Capetian kingdom was confirmed in his status as the first Western power. Wise and prudent administrator, Charles V reorganized the army and the administration of finances. It establishes fouages ​​and aid tax is permanent which were established to contribute to the war effort. The royal army was, too, became permanent, formed companies captains appointed by the king, supplemented by artillery fire and a navy. Great builder, he built the Hotel Saint-Pol, rebuilt the Louvre and the Château de Vincennes. Prince scholar, he developed a great library and encouraged scholars. In 1373, Charles V had brought the royal majority at the age of thirteen.